For someone who’s interested in tech and other related areas, how would one go about to invest in those type of companies, say AMD or Intel?

After getting this question I did some research and I actually stumbled upon a perfect storm scenario. Or as the suits on Wall Street call it – The short squeeze. Let me explain:

Even investors think about AMD in such way. Due to the sloping PC market and reduced margins in the PC processor space, people are fleeing the AMD stock and smart money is shorting it. (Shorting allows you to make money when a stock is going down in value, also known as betting against a stock). The amount of shorted stocks is so high now that it totals 20% of all of AMD’s shares. It means that for every five shares out there, someone has bet against one of them.

Shorting is a great tool to use when a stock is steadily dropping in price but it has an opposite affect as well, as soon as the price starts to rise, people shorting the stock are losing money and would like to sell their positions. Here’s the caveat, they would have to buy a stock to cover their short position this leads to an increased demand and pushes the price even higher.

On April 15th, Netflix had a short ratio of 16.5% which is less than AMD’s current ratio. For a large-cap corporation, this is a significant proportion of shorts. Before their earnings report, shorts piled in to take advantage of a negative report on April 22nd. Netflix posted much higher earnings than expected, sending shares soaring in after hours trading. Here’s where the squeeze occurs. The surprise earnings beat triggered a  decent gain of roughly 7%. However, this spike then transformed into an overnight gain of 23%. How? The original spike in share price “squeezed” the shorts out of their positions in exponential numbers. The “snowball effect” of shorts closing their positions and new long positions entering the scene in an attempt to cash in on the pop continued to push the share value higher. 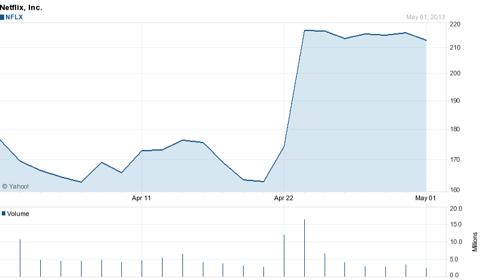 The perfect storm – Only Seen by a Gamer

Doing some research I found that AMD has something which Intel doesn’t. It has the exclusive production right to produce the processor for both Playstation 4 and Xbox one.  IHS initially projected the combined sales of the consoles to reach 4 million units.

Sony Computer Entertainment Company Inc, the subsidiary of Sony Corporation (NYSE:SNE) announced that it sold 2.1 million units of PlayStation 4 (PS4) since its launching in November 15 until December 1, 2013.

Microsoft is experiencing record sales and it’s selling every Xbox One player it can make after introducing the new game console on Nov. 22.

Both consoles are equipped with 8 core Jaguar Architecture CPUs embedded with the 1.84 TFlop Radeon GPU. AMD is generating $88 for its APUs on every unit sale of a console according to the Inquirer, and some speculations has gone as high as $125 per console.

Updated projections of the combined sales for both the consoles is now estimated to be north of 6 million units. This means that AMD will ship up to 2 million more chips generating between $176M – $250M more in revenues than expected. That’s a 12% – 16% increase in quarterly revenues, enough to boost up the stock more than the 7% gain Netflix had. This will eventually trigger the short squeeze pushing up AMD’s price 20% from today’s price. It will be interesting to see how this stock performs up until January 20th when AMD’s next earnings report is due. My guess is that they will beat expectations.

FYI: The last time the days to cover short interest was this high was in March of this year when the stock price shot up from $2.5 to over $4 on the back of a massive short squeeze.

Helpful tip: The short interest divided by the daily volume will give you another interesting way to look at this information (the amount of days it would take to cover all short positions, based on daily volume). A higher value for days-to-cover signifies a possibly longer, more drawn out squeeze.

Want me to answer one of your questions?

Submit your questions here or email me at AskAlex[at]Sprinklebit.com