When considering how to create a diversified investment portfolio, there are a number of approaches you can consider.  And to be honest, no one way is better than another.

Much like The Breakfast Club, however, companies can be broken down into categories like the athlete, the brain, the rebel, the princess, and the basket case.  Let’s just call them the Investment Club.  If you want a diversified portfolio with a mix of blue chip companies and rising performers, then consider the following:

The Athlete: Under Armour ($UA)

Under Armour is the runner in the middle of the pack waiting for the chance to sprint ahead. The company has been doing well, exceeding most expectations and turning over a sizable profit. Sporting more than 20% growth for the past 17 straight quarters, the company is steamrolling ahead leveraging creative ways to increase market share.

While their competitor, Nike, signed Kevin Durant, Under Amour had more up its sleeve. As a push to garner more ground in the female active wear market, they signed Gisele Bundchen, a supermodel, and Misty Copeland, an American ballerina, to push their new “I Will What I Want” campaign.

Under Armour spent a total of $ 246.5 million on marketing alone in 2013, which accounted for 10.5% of net revenue during the fiscal year.  Considering the 10-year $300 million Kevin Durant deal that did not go through and the news of a fracture that will keep the player out for six to eight weeks, Under Armour has dodged a financial bullet.

This rebranding looks promising and will definitely boost Under Armour’s relevance to an ever-expanding market segment.

The Silicon Valley company has all the brains, but it comes with some doubt. There has been a lot of talk about Apple’s eventual decline for years and while it may happen, it will not be anytime soon. Samsung and the other Android platforms have gained significant ground in the Smartphone market, but Apple continues to surprise the market by producing newer, better products.

The company has revamped the iPhone with it’s next generation iPhone 6 and 6 plus, which closed the door on any competitive advantages Samsung may have held in terms of size, delivering their biggest and lightest smartphone yet. As if that was not impressive enough, they also introduced Apple Pay, which is set to revolutionize the payments industry and the much anticipated Apple Watch, which will both become vital parts of the Apple ecosystem. It is also important to note that Apple’s Mac sales have increased significantly, driving up their market share to a total of 28.5% of the PC market.

The release of fourth quarter earnings has proven the success of Apple with a 12% increase from the previous year, the company has achieved $ 42.12 billion in revenue versus the estimated $ 39.85 billion.  Delivering a strong performance across the board, the company’s substantial sales cannot be taken lightly. From computers to wearable technology, Apple does not seem to be slowing down. The brains conquer the brawn. Taking the path less traveled, Amazon has drastically changed how Americans shop today. With their Prime membership program, goods are a click away. Not one to shy away from innovation, the company has also moved into gadgets, feeding their own ecosystem by creating the Kindle.

Constant improvements of the device have led to the newest version, the Kindle Fire HD, an alternative to the coveted iPad.  The company did not stop there however, moving on to create the Amazon Fire TV, and most recently unveiling their own Smartphone, the Amazon Fire phone.

While the smartphone did not receive much fanfare, there is an expectation of a 20% growth year-over-year.  Following the success of Alibaba’s recent IPO, it’s become clear that there are opportunities to show profits in their industry, which will put some pressure on Amazon to revisit their ongoing low-margin strategy that has kept investors on the sidelines.  Many expect Amazon will make some big changes in the months and years ahead.  And while we may not have Amazon drones delivering packages just yet, Jeff Bezos will surely keep Amazon on their toes. Disrupting the status quo takes some serious moxie.

A long-standing icon in the beauty industry, Estee Lauder continues its path as a market leader. With a diverse brand portfolio housing brands like Clinique, MAC, and much more, sales continue to be on the rise. With an acquisition based growth model, the company is sitting on a hefty chunk of cash and rumors have been confirmed that Estee Lauder will be acquiring Le Labo.

The newest acquisition is an independent perfumerie that has a global cult following with annual sales closing around $30 million. Another pretty bottle for Estee Lauder’s collection, but considering their record sales of $ 10.79 billion in 2014 alone, it is safe to say that Le Labo is in good hands.

Their flair for building small companies upwards has made Estee Lauder home to some of the newest and hottest brands like Tom Ford Cosmetics, the designer’s first foray into beauty and fragrances. With a strong foothold in giant markets like China and South Korea which both have an unquenchable thirst for luxury goods and beauty products, they’re in an exciting position to continue to post solid revenue gains that will surely keep Estee Lauder as highly revered royalty in the beauty world. 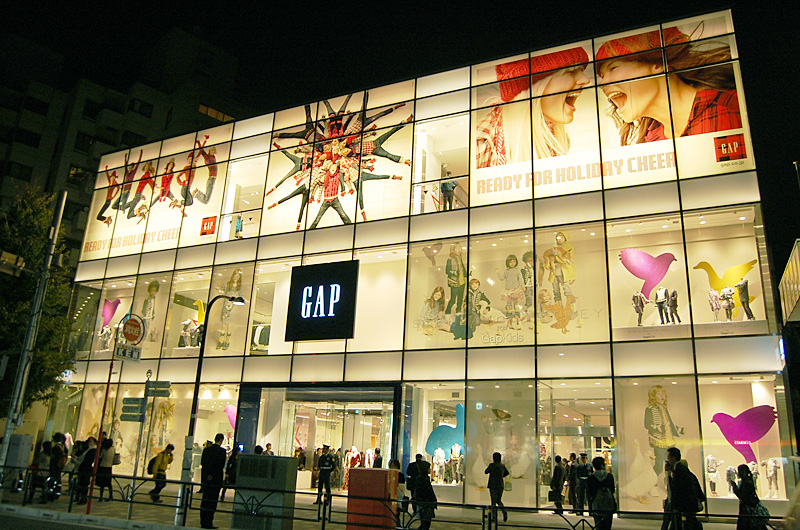 Gap Inc. is very impressive, made up of nearly half a dozen brands, but the risk in their underlying business is apparent. New marketing and other tools have improved the brand, but with the departure of their current CEO, Glen Murphy in the coming months, the company is facing shaky territory.

The incoming CEO, Art Peck seems to have extensive e-commerce knowledge that should help push the company into the future, but sales have continued to come in below expectations.  Yet, growth opportunities do exist across their brand portfolio, but a big factor in their success will be centered around their ability to really grow and expand e-commerce.

Domestic net sales for the first quarter of 2014 of both direct and online sales declined 0.7%.  The real trial for success will heavily depend on their ability to fully capitalize on the e-commerce growth in international markets like Asia and Europe with increases in net sales of 12.1% and 13.1% respectively.  These factors have given Gap an edge with total online sales of the first quarter rounding out to $ 575 million, a 13% increase from $ 509 million just a year ago.  The market doesn’t seem quite as confident in the company, as the reaction to the news of the CEO change, combined with weaker than anticipated sales in September of 2014, led the stock to a one day drop of 12%.  Sink or swim, the new CEO will have to dive right in to make sure the company stays on course.

Diversification is key and options are abundant, but these are some companies that are worth keeping an eye on.  Check out how the Investment Club portfolio is doing at SprinkleBit.com.  Don’t have an account yet?  Sign up for a free simulated portfolio today and start tapping into the community for investment ideas that can help you reach your financial goals.

Why Anyone Can Be An Investor

Pump Up Your Returns by Following These Experts

A current senior at the University of California, San Diego, Sinan grew up in Silicon Valley and has developed an affinity for fun technology and fast cars. She is interested in long-term investments and focuses on the apparel and tech industries. Always interested in learning something new, she is constantly on the hunt for useful information that may lead to a great opportunity to invest.